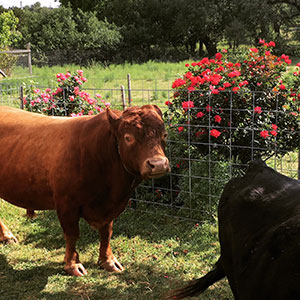 By Invisible Fence® Brand on 05-14-2018
Our last post on the #PetsofInvisibleFence was so well received, we did a Part 2! From service dogs to farm creatures, and even exotic jungle species, we’re proud to have given more than 3 million pets greater freedom and their parents confidence in their well being during our 45 years of doing business. As National Pet Month comes to a close this month, here are just a few more of the animals who make our Invisible Fence® Brand Family even more special.

Mooooooove over! Henry the Bull from Austin, Texas has learned safe boundaries – and so have his fellow farm mates: a Dexter Cow, three sheep and a few dogs. Their owners have worked with us to create an intricate system of fences and avoidance areas to keep many different animals safe and the farm running smoothly. Thanks to their Invisible Fence system, these farm animals stay out of the food supplies, away from chickens and out of the pond, and even stay when the gates are left open. 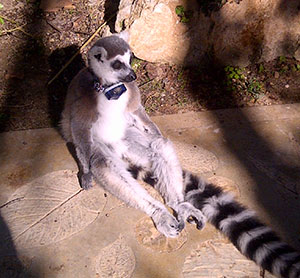 This adorable Madagascar Lemur who calls the Bermuda Zoo home, kept getting injured when he reached into the cage of his not-so-friendly monkey neighbor. A zoo member happened to be an Invisible Fence customer and suggested a fence solution to zoo keepers as a way to protect this little guy in his habitat. The zoo gave it a try, and today this friendly lemur has learned to keep a safe distance from his neighbor while still enjoying full access to his home and play area. 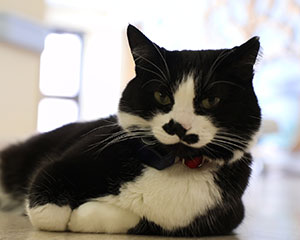 Patches may look like an ordinary cat, but she has quite an extraordinary job as the official pet of a long-term care facility in Alberta, Canada. Jane Machacek, a facility nurse for the last 30 years, said the then frail-looking cat began visiting their garden in search of food. As the weeks passed, both the residents and staff fell in love with her, giving her regular meals and bringing her indoors when the nights got cooler. Noticing how the cat lifted the spirits and provided a sense of normalcy to the residents, the staff raised money to pay for Patches to be spayed and immunized. But a kitty will be curious – Patches soon began making her way into the acute care area of the facility where she wasn’t allowed. That’s when Jane called her local authorized independent Invisible Fence dealer and arranged for Patches to be trained on a Shields® Indoor Solution. Thanks to Jane and the kind donation of a resident’s family, Patches has been safely brightening the days of nursing home staff and residents for more than four years now. 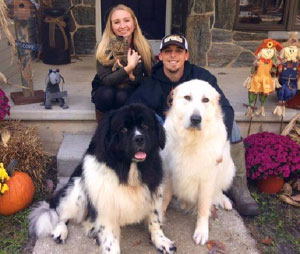 Meet two gentle giants who live in New Jersey: Louie, a 2-year-old Landseer Newfoundland, and Leroy, a 3-year-old Great Pyrenees rescue. With a large wooded property, these two independent canines were prone to roaming all about, and their owner Sean knew a traditional fence was not the right option. After spending hours researching methods to keep his big guys safe, Sean enlisted the help of Invisible Fence of the Jersey Shore to train the dogs on an Outdoor Shields® Solution. "Our boys love being outside leash-free and have just over an acre to roam and play freely. Not only is the Invisible Fence Brand top-of-the-line equipment, but I’m able to call and text my support rep with any questions or concerns and know I'll get a response quickly. That relationship and service is something you will not get with a DIY system."

Even exotic cats like Django, a Serval in western Washington, can keep out of trouble indoors and learn boundaries. This African feline can grow as large as 40 pounds, and with the longest legs of any cat relative to its body size, Servals can leap further than six feet at a time! Before Invisible Fence, Django had a bad habit of climbing on top of the refrigerator and pouncing on people, but now he enjoys his freedom at, errr, a lower elevation. 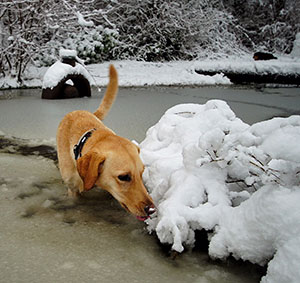 Meet Joi. This beautiful adopted Labrador calls Vashon Island, Wash. home, and her story is anything but typical. Her owner, Jen, was vacationing on the island of Koh Tao in the Gulf of Thailand when she met the stray beach dog, fishing in the ocean and begging for scraps from tourists. The pair became inseparable over the next few days, and soon Jen simply couldn’t ignore her gut instinct that despite all the hurdles and logistics, the dog was destined to return home with her to the U.S.A. But homing a stray can bring challenges. To Joi, “confinement” measures like houses, locked doors and leashes were a threat to her survival instincts, and she ignored commands and ran away often. But today, thanks to Jen’s patience, devotion and training, and with the help of an open environment provided by an Invisible Fence containment system, Joi is thriving on more than five acres of Pacific Northwest island paradise. Read more of her story here. 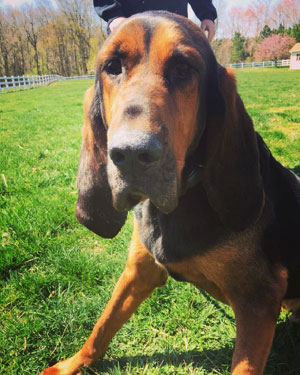 Don’t let those sweet eyes and soft droopy ears fool you – you’re looking at one tough, crime-fighting police dog. Invisible Fence Brand of the Bay Area donated and installed an Outdoor Fencing Solution for Maryland Police Trooper First Class Brian McInerney and his partner, Gunner, who has an affinity for deer chasing. Gunner holds the current record for “finds” among all active bloodhounds in the state of Maryland. But he no longer spends his downtime chasing deer and wandering far from home.

Whether your pet’s boundary and training needs are relatively standard or way outside the box, we can find a customized solution that works for everyone. Learn more at InvisibleFence.com.

Get Monthly Pet Tips Sent Straight To Your Email

At Invisible Fence we’re passionate about protecting pets — so you can focus on fun! So, let’s talk. And we’ll find the gentle, effective, affordable solution that’s right for you and your pet. Guaranteed.